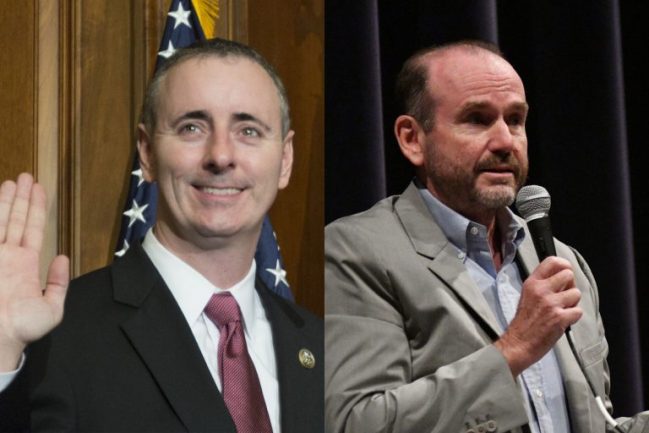 This article was written by DelVal student Christopher Handy.

Bucks County residents are not known for their blind party allegiance.  As the season changes and the leaves fall from the trees, so too have many political hopefuls fallen from the political stage.  Candidates find here that it is not the color of their ties that make the difference, but instead the value they will provide to their constituents.  On the chilly morning of Friday, the 19th, thanks to the Bucks County League of Women Voters and the Bucks County Chamber of Commerce: Delaware Valley University hosted a heated political debate between the major candidates for the newly established 1st district.

The debate began with Scott Wallace introducing us to a time where the dominating political ideology was service to country.  As a young Senate staffer, he served the Republican party, and his political leanings were never even a concern during his time on the hill.  Now our political parties have created a system so dysfunctional that party purity has become the standard.  Party before country is the political mantra, and corporate interests now own the parties.

Brian Fitzpatrick begins by introducing us to his young dream to serve the American people in the pursuit of justice at the FBI.  He fulfilled that goal and worked to reduce the corruption within our system.  Partisan ideals have not tainted Fitzpatrick, for the independent constituency he has worked to break the dysfunction through the Problem Solvers Caucus.  As a Republican, Fitzpatrick broke with the party repeatedly, most notably voting against the repeal of the Affordable Care Act.

Though both candidates came to an agreement on the lack of compromise occurring in Washington their views on many issues are diametrically opposed.  The first question posed to the candidates was in the form of tax reform.  Wallace took a strong position against the indiscriminate cutting of taxes without a clear plan to pay for the cost. Which will add to not only our yearly deficit but also the countries ballooning debt.  He makes clear his belief that the Republican party will once more go after entitlements placing the cost on those least capable of affording payment.  Later in the proceedings he touches on tax reform again calling for cuts to drilling tax incentives, more fairness, and less loop holes.  Then he calls for an increase for the one percent declaring, “a rising economy should lift all boats not just yachts.”

Fitzpatrick defends his vote for the recently passed tax legislation.  No substantial tax reform has been performed since 1986, and the world has changed drastically since then.  Our corporate tax rate of 35% was not competitive and the economy needed a jump start.  The stalled economy was a threat to funding for educational, environmental, and a myriad of other programs.  Now the economy has improved with an unemployment rate around 3.7%.

The unpaid increase to the Nation’s deficit is a huge problem that will need to be dealt with at some point.  Cuts to entitlements are certainly an option that the republican party has regularly championed.  Our tax code did require an overhaul that reduced the corporate tax burden.  However, the argument that the economy’s growth is due to the new tax bill or even fiscal legislation over the past couple years is questionable. Only time will tell the effect of this reform on the economy and tax revenue.

Then, we move right into healthcare with Fitzpatrick taking the helm.  Voting against ACA repeal was necessary for him to best serve his constituency.  He does not support single payer but at the same time feels that the wild west did not serve us well either.  As a believer in capitalism, he supports interstate competition that will break up the insurance monopolies poorly serving their customers.  He also champions medical liability reform proposing a cap on non-economic damages.  He points out that this reform will reduce unnecessary testing and services performed for legal protection alone.

Wallace points out that to support the ACA and not the individual mandate, which was removed in the tax cuts and jobs act, is counter intuitive. With this key provision removed, the ACA has once more been rendered unstable despite its success against repeated attacks.

Healthcare is a complicated issue that has not become less so with the ACA.  Voting against the ACA’s repeal and then hamstringing it seems disingenuous.  While Wallace does not bring to the table improvements to the current debate, the liability reform cap is questionable in its overall value in resolution of the systems ails.  Redundant and unnecessary testing and services are an issue, but a cap will likely benefit regular offenders while only possibly reducing redundancy and waste.

Moving on, we breach fiscal policy, though not much to see here.   Fitzpatrick champions the benefits of the Problem Solvers and how they will champion a bipartisan Speaker of the House who will bring bipartisan bills to the floor for a vote.  With the economy in an expansionary period, the emphasis on bills that do not add to the deficit through a revenue expense match will be practical and common.

The issue for Wallace returns to the recent tax law which created a 2 trillion dollar debt explosion.  Also due to tax loopholes in the bill, some wealthy people will still be paying zero in federal tax.

While the Problem Solvers are an excellent symbol of compromise, they have yet to solve any meaningful problems.  The congressional vote is still predominately along party lines, most major reforms over the past decade have occurred in this manner.  Until the electorate holds their entrenched representatives’ accountable for supporting bipartisan legislation co-sponsoring will be just cheap signaling.  As for the debt explosion, the overall cost will be influenced by factors which are currently unseen.  However, a reduction in revenue should have a clear benefit to the American people rather than a theoretical one.

Regarding job market preparation both candidates support the valuable technical school educations being provided throughout our district. As well as the value of a college degree as measured in modern terms of success.  The divergence in opinion forms with Wallace’s belief that post-secondary education should simply be less expensive.  He is also a proponent of readily available debt forgiveness programs provided by public and private institutions alike.  Fitzpatrick also believes that prices are too high, but due to supply and demand forces exacerbated by the channeling of ever-growing numbers into colleges. One peculiar point Fitzpatrick made was that many jobs remain unfilled due to the inability of candidates to pass drug tests.

Energy independence is another issue where both agree that green jobs and renewable energy are valuable measures.  Fitzpatrick believes we can advance the economy and the environment simultaneously and is a proponent of investing in infrastructure that supports green energy.  Wallace sees energy as our next moon shot with 100% renewable energy as our nation’s goal.  He refuses to accept methane as a meaningful stop-gap measure to this end; since when released it traps substantially more heat than carbon dioxide.  For this to be accomplished he acknowledges that a national commitment must be obtained.

For national entitlements both want to keep social security solvent.  Wallace proposed an increase to the cap on earnings that currently prevent high earners from paying the social security tax on all wages.  He claims with our record deficit it is time the 1 percent paid their fair share. Fitzpatrick fires back with the reality that Wallace is part of that select group.  He continues by proposing senior payment streams to be tax-free, as well as yearly increases to be tied to CPIE which tracks inflation for products purchased by the elderly (Wallace agrees during his next response).

The only comment I would like to add is that the 1 percent earns a large portion of their income from investments.  The income tax and parole taxes (Social Security, Medicare, etc.) only tax wages.

Minimum wage is a non-contentious issue.  Fitzpatrick calls for a variable minimum wage that reflects the cost of living for the area. Increases would then be attached to the consumer price index rather than requiring congressional action.  He believes that this would reduce the situation many lower income people find themselves; where it is more cost effective to remain out of work.  Wallace takes an across the board approach with an increase to 15 dollars over time.

No real ground-breaking positions that drastically diverge from the party line for either Immigration or gun safety by either candidate.  Although it seemed that Wallace channeled Regan when he responded with, “there he goes again with the Problem Solvers Caucus.” Campaign finance brought both to the table against the excessive amount of money in politics.  Wallace calls for full disclosure of corporate spending, and an amendment to the Constitution to allow Congress to once more constrain money’s distorting influence on politics.  Fitzpatrick uses this moment to point out that Wallace was unwilling to cap spending in this election.

In criminal justice the candidates find common ground, acknowledging we have an issue with a prisoner population that will predominantly be released into the population.  Both agree that the offender needs to be prepared for this reintegration.  Wallace takes it a step further by proposing efforts to reduce crime and address the offender rather than the offense.

The term limits question causes Wallace to champion freedom of the electorate to choose their representative regardless of terms served.  While at the same time declaring that Life tenure for Supreme Court Justices should become 9-year terms.  Fitzpatrick strongly defends term limits using evidence from political corruption cases indicating that most prosecuted cases were of politicians around for 15-25 years.

Marijuana legalization receives what seems like a tepid response from Wallace until you realize that he not only equates the drug with alcohol but also demonizes alcohol as the actual gateway drug.  He is a proponent of allowing the states to handle this issue and dropping it to a schedule 5 drug if not total removal.  Fitzpatrick sees a medical use for some compounds in marijuana, and possible use as a pain reliever to reduce the opioid epidemic; though he makes no effort to speak on recreational use.

The availability of town halls over the past couple of years became a hot-button issue.  Fitzpatrick claimed that his availability through numerous events throughout the district made up for the lack of formal town halls.  With the tele-town halls increasing availability for those not able to attend the other events.  Wallace says the tele-townhalls were rife with screened questions, unpredictable times, were unscheduled and if you missed the initial call you were out of luck.  He promises if elected he will have a minimum of 4 formal town halls.

If you are anything like me, this debate was not decisive, and you remained on the fence about which candidate will best support the issues that matter to you.  I have chosen to take a more expansive view:  which candidate will have the most influence on the direction our country is headed.  While I refuse to vote solely along party lines, often a candidate is just a cog in the machine.  With that in mind, the scales have been tipped in favor of the candidate that will vote primarily with the party that more closely reflects my values.  It is our honor as United States Citizens to vote for our vision of the future.  Whoever you vote for this coming election day stay informed not only about your candidate’s vision, but also their party’s.